A massive fire tears through the Wakefield warehouse, leaving a building completely gutted and 80 firefighters from West Yorkshire crews battling to control the blaze

By Chris Jewers for Mailonline

A huge fire ripped through a warehouse in Wakefield last night, with West Yorkshire firefighters battling the blaze until the early hours of Thursday.

About 80 firefighters from 13 fire station crews across the county were called to the Dale Street warehouse complex in the Ossett area just before 8:20 p.m.

Photos taken above the warehouse showed a huge column of smoke rising from the buildings below, which glowed orange from the flames.

There are several houses near the scene of the fire.

About 80 firefighters from 13 fire station crews across the county were called to the blazw at the Dale Street warehouse complex in the Ossett area just before 8:20 p.m.

According to the West Yorkshire Fire & Rescue Service, two businesses – a car workshop and a concrete factory – were affected by the blaze.

The fire department said 100% of the warehouse building was destroyed.

Local road closures would be in place overnight, he said, as his crews battled the blaze, and urged people to keep their windows rolled up.

He also posted on Twitter to thank residents for their understanding after some diverted their water to help fight the blaze, while warning of possible power outages.

A witness who lives in one of the houses near the fire told the YorkshireLive that the fire had drawn a crowd. 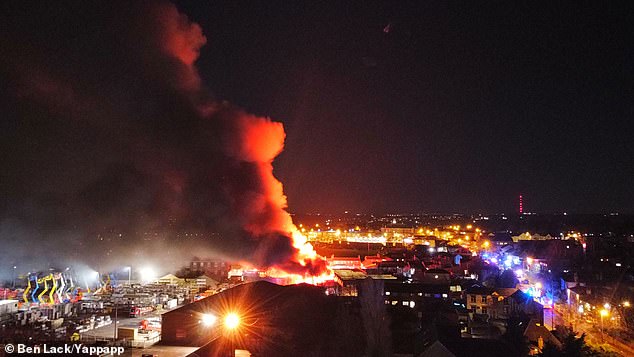 Footage from above the warehouse showed a huge pillar of smoke rising from the buildings below, which glowed orange from the flames

“I was just putting the baby to bed when that’s what we see,” Jacklyn Ellis said.

“People block the reader to watch what’s going on and there are more people walking around than on a busy day.

“People are still driving down the road, over the fire hoses to get turned around. People should avoid dale street if they can.

Another witness said they could see smoke from their home nearly two and a half miles from the site.